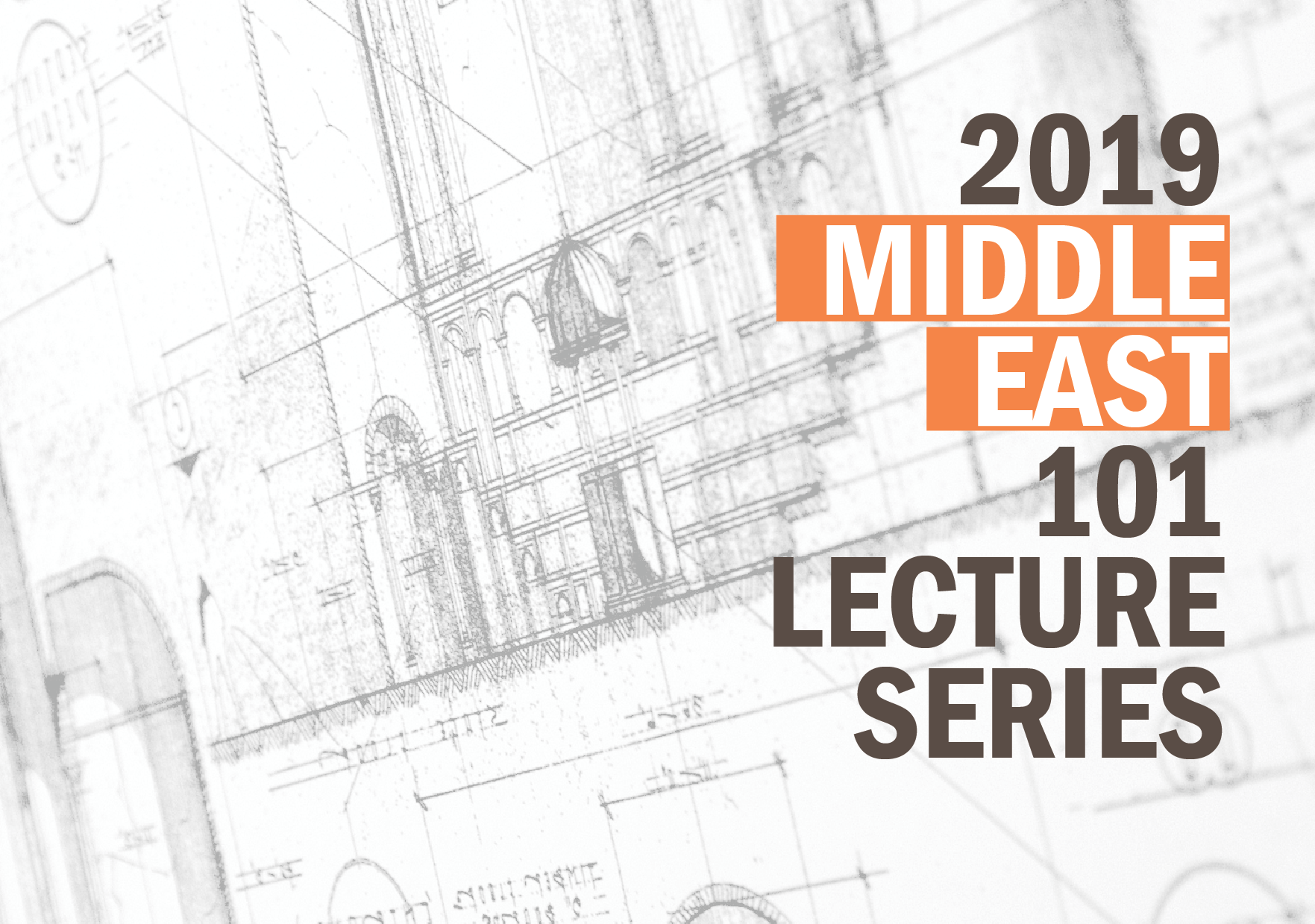 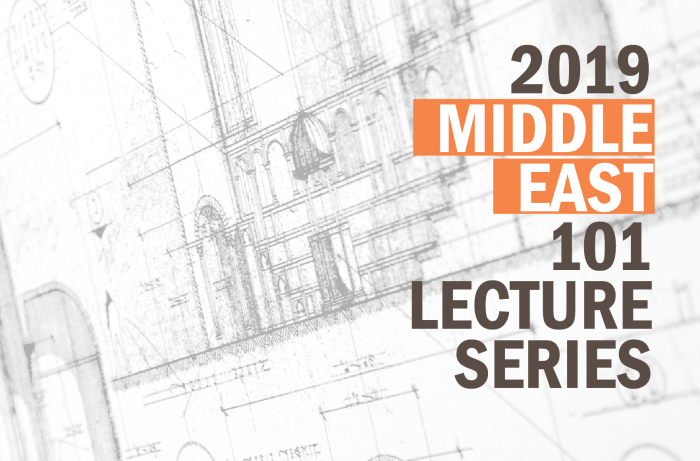 Throughout history, the Middle East has been locked in engagements with the West through crusades, wars, colonialism and terrorism. In contrast, their history of engagements with the East has been more positive through trade, pilgrimage and inter-marriage. This series of lectures give an overview of the circumstances and impact of the encounters between the Middle East and the rest of the world in terms of politics, economics and cultural norms.

A certification of participation will be awarded to those who attain 70 per cent attendance at the ME 101 Lecture Series 2019.

The sessions are held from 5.00pm to 6.30pm and the registration link is accessible HERE.

Series Introduction: Developments in the Middle East: Why Singapore should Care by Bilahari Kausikan [Wednesday, 21 August 2019]

The Syrian refugee crisis is an ongoing Middle East humanitarian crisis which has reached its ninth year with no sign of any slow-down. More than six million refugees have moved abroad in a flight for safety — three million in Turkey, one million and a half in Jordan, and another million and a half in Lebanon. The massive humanitarian crisis presents logistical challenges, especially in small countries like Lebanon which has 20 per cent of its population living as refugees on top of the existing 700,00 Palestinian refugees. More than 60 per cent of the Syrian refugees living abroad are children age below 15 years old and less than half of them receive any formal education.

Love Aid Singapore — a local privately-funded non-governmental organisation (NGO) — has made several humanitarian trips over the past six years to the Middle East, predominately Lebanon, to provide relief partner assistance to the Syrian schools and NGOs. Trips were specially made during the Muslim Ramadan fasting month and December winter period to provide relief and humanitarian assistance whenever possible to the refugees living over there. This presentation will touch on the kind of assistance we have provided so far in our humanitarian trips, challenges posed while carrying out relief work, and future plans for the NGO.

Lecture #02: From Suez to Singapore: All you need to know about Aladdin, Gigi Hadid, and Osama bin Laden by Koh Choon Hwee [Wednesday, 4 September 2019]

When the term “Middle East” was first coined in the early 1900s, it was defined as “an indeterminate area guarding the part of the sea route from Suez to Singapore”. This meant that if you were in Tuas and you jumped into the water, you would have been in the “Middle East”, at least, in the 1900s. Why was this so? Also, what do an Orientalist cartoon, an LA-born supermodel, and a dead Saudi terrorist have to do with each other? Using hip-hop/rap music from the Arab world, Hollywood movie clips, newspaper headlines, and Instagram photos, this talk deconstructs media coverage of current events, exposes their effects on Singapore society, and equips the audience with basic media literacy skills and Middle East 101 knowledge.

1. The Northern Tier – the Levant by Fanar Haddad

This lecture will go through the major political movements and events that have shaped the region over the course of the 20th century and into today. From independence movements to Arab nationalism to political Islam, these and other political currents formed the ingredients of a prolonged struggle between clashing conceptions of political community and legitimate authority, both in individual nations and the broader Arab Middle East.

2. The Gulf States by  Susan Kurdli

Gulf states have similar economic models, share the same language/culture/religion, but pursue different geopolitical interests. The main source of revenues is coming from oil and gas sales, which are used to cover the states’ budgets. What is left is invested abroad and into domestic infrastructure projects that enhance the business environment, improve the quality of life of their citizens, and serve as a tool to redistribute wealth among the citizens. But today the Gulf countries face a new challenge. Oil prices have been low for few years and the Americans, historical security guarantor of the region, are less engaged in Middle East. In addition, historical opponents such as Iran and Turkey are becoming more aggressive and expansionists. The lecture will explore how these trends are evolving and how they are shaping the region’s future outlook.

Although they are two relatively distant regions, the Middle East and Southeast Asia share a number of common interests. These commonalities go beyond religion, terrorism and energy. In fact, the Middle East and Southeast Asia are bound to each other by a deep historical connection that is even cited in the Sejarah Melayu — a historical and literary text written in the 16th century about the history of the rulers of the Melaka Sultanate and their descendants. With the rise of Asia in the 21st century, Arabia is becoming ever more engaged with the rest of Asia, making it necessary to also look forward and assess potential trends between the regions.

Once the cradle of multiple ideologies and cultures for hundreds of years, contemporary Middle East is now tarnished in identity politics which has seen the emergence militant/violent sectarian organisations like ISIS and Hizbut-Tahrir (HT). With the aid of migration and the internet, these movements have extended their influence to the shores of Southeast Asia and beyond. This lecture attempts to trace the establishment, development and impact of these movements giving particular focus to HT and its network and influence in Indonesia, Malaysia and Singapore.

Lecture #07: Prospects for a Two-State Solution to the Palestinian-Israeli Conflict by Victor Kattan [Wednesday, 9 October 2019]

Statements from US officials responsible for formulating policy towards Israel and the Palestinians increasingly suggests that the Trump administration may be preparing to abandon its efforts to establish an independent Palestinian state. This raises the prospect as to whether a two-state solution is still a viable option to resolve the Palestinian-Israeli conflict. This lecture provides an overview of the main solutions that have been proposed to resolve this longstanding dispute, and considers what might happen next.

Once hailed as a political model for the Arab world, Turkey has failed to uphold its reputation as a “moderate Muslim country that works”. A decade ago, Turkey was a country of unprecedented economic growth, major political reforms, and a newfound cultural confidence. Today, after a series of diplomatic, political, and now, economic crises, the country is struggling to make ends meet. This lecture explains Turkey’s baffling transformation by placing it within a chain of historical developments that can be traced back to the Soviet break-up in 1991, and analyses those developments within a single narrative, namely that of Turkey’s post-Cold War odyssey.

Gulf countries’ dominance over world crude production is set to continue for the foreseeable future. But after a century of growth, global primary energy demand will plateau in a decade. A revolution is underway: Electricity demand is surging by 80% in the region by 2050, whilst renewable energy is already cheaper than coal and gas plants across two-thirds of the world. How is the energy transition impacting energy politics in the Gulf? What changes are taking place domestically? Is this transition helping the region break free from its reliance on oil and gas? Or is the region’s stability at risk from the dwindling importance of their main export on which they have been fiscally dependent? To what extent are their institutions equipped to manage these changes?

The sessions are held from 5.00pm to 6.30pm and the registration link is accessible HERE